We often do day trips to Twillingate  in the spring for icebergs and in the summer to see whales and icebergs if they linger. This week we spent a night and played tourist on October 25th. It was a great fall getaway.

We attended a Meet and Greet with the executive of Hospitality Newfoundland and Labrador. Some local tourist operators were also there and one of the challenges discussed was that many attractions and businesses are seasonal and out of season tourists are seeking things to do. An excellent answer was given, I think by Deborah Borden of the Anchor Inn,  that if operators know what is open and promote that, it is easy to have a successful experience in the area. It was a great answer and became the theme of our getaway.

I’ve recently started work with The Old Salt Box Co. and Leo and I were ‘tasked’  (read, ‘blessed’) with spending a night in one of their properties, Daisy’s Place in Merritt’s Harbour.  I had toured the house recently but it was a new spot for Leo and it was fun to see his reaction when I opened the door to this beautiful accommodation.

We moved in our bags and headed to Twillingate in search of food and wanting to check out the new brew pub, Split Rock Brewery.

We were hoping to get a meal at the brewery but they do not serve food but a kitchen is in the works for next year. The bartender took pity on us and opened a bag of chips from the under the counter stash and we settled in for a little taste test.

The brewery has been open 3 months and is situated right on the main street. There is a licensed patio and a lovely water view from the deck. We had some input from the other punters and picked 4 beers to try on a flight.

We knew a number of the restaurants were already closed after full tourist season so I asked about a new pizza restaurant that I had noticed on the way into town. With a vote of approval from the barman, we headed back and are new fans of Island Pizza Plus.

I struck up a conversation with a little girl at the next table to assured me the poutine was also delicious and after trying one, promised the homemade chocolate chips cookies were just as good as the poutine.

After supper we did a visit to Gertie’s Place and watched the sun set with our friends Janet and Richard. My head was on a swivel as I watched the sun set out the small window, through the picture window and the reflection on the electric fireplace. I think I need to find a way to get tasked to stay here too!

I first found this house a number of years ago with Richard’s The Old Salt Box Co. construction trailor parked beside it. He had the house stripped right to the studs from the outside and the inside and I could see through the house to the view he was planning to frame with the living room window.  What I didn’t realize until visiting was that the shed outside is actually a bunkie and houses a third bedroom.

I toured this house last month too but again, it was Leo’s first visit.

We went to our HNL meeting at the Anchor Inn in Twillingate. It was great to meet a few more people in the industry and to connect with some I already knew. I’m always looking for operators who might consider being members on my Newfoundland Iceberg Reports facebook group to ensure we are getting as many accurate iceberg reports as possible.

In addition to sharing information, we shared concerns and two that apply to my post tonight are what does Twillingate promote when iceberg season is over and where do we send guests when museums and events are closed after Labour Day? Now working for The Old Salt Box Co. I need to think about this.

Deborah’s suggestion of being aware of everything that is open rather than lamenting what is closed was a great suggestion and became my theme for the next day.

We headed back to Merritt’s Harbour and were greeted by a million stars in a rural location not poluted by street lights and neon signs. It was a warm night, like mid summer.

When we finally went in the house we were met by what seemed like a million daisies as the chandelier worked it’s magic on the walls and ceilings of Daisy’s. This really is a special place to stay.

After breakfast and a few more pictures of the area around the house we dragged our gear to the car and said good bye to Daisy’s Place.

On our way to Merritt’s Harbour we had seen a pond that was the community swimming hole. A sign indicated a trail and we commented on how pretty it looked on Tuesday afternoon. After a restful night, we decided to explore the walk before heading to Twillingate.

The trail has not had any recent work and some areas of the boardwalk are getting overgrown a bit. It was an easy trail though and all wooden stuctures seemed sturdy and secure and much of the trail was soft, needle covered forest floor. We were harassed and chastized by squirrels along the way and they really got annoyed when Leo showed me the squash berry trees and we helped ourselves to the sour fruit.

The board walk was most visible going to the right of the pond.

Some plants have invaded the boardwalk but it was easily walked.

The forest was gorgeous. It was almost 20 degrees Celcius at 11 a.m.

In our usual form, we saved this section for next time.

Half way around we were facing the docks and swimming area. 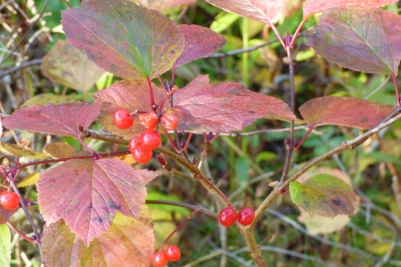 Squash berries and dog berries were in abundance in some spots.

The walk was beautiful through mixed boreal forest.

The fall colours were great this year. 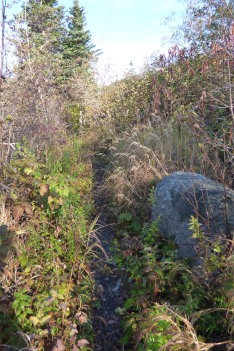 The end of the trail was more overgrown. This section runs parallel to the road and I think walkers probably just walk the road when they get around.

He was not impressed and told us so. Repeatedly.

This would have only been a 20 minute walk or so if I didn’t have my camera. It is a lovely spot but seems to not have had any trail work recently. Regular use has kept most of the plants from over-taking the trail.

We toured around Durrell and out to the lighthouse at Long Point. No icebergs of course but it was a beautiful day and there were lots of boats, small and large on the go.

We enjoyed our pizza  and beer so much the night before that we decided to pick up a couple of slices and see if we could eat them at the brewery. Leo suggested and I thought of it at the same time, that we should get an extra slice for the bartender. Sadly, for the bartender and us, the brewery wasn’t open at 12:30 but the gulls and a crow enjoyed the last of our crusts at the rest stop where we picnicked. 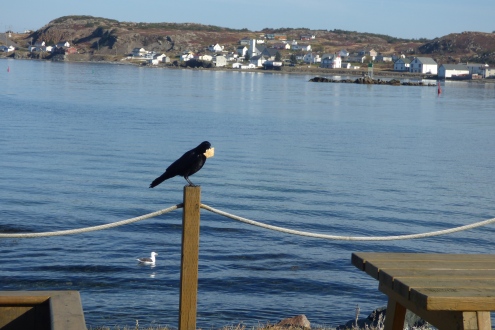 In Durrell, at the Ashbourne property there is a beautiful display of a miniature village. Because of the old glass used, I could not get good pictures of the interiors but the folk are was done with great detail. The church had pews and the school had little figures at wooden desks. the whole display was wired to be lit a night.  We’ll have to go back! 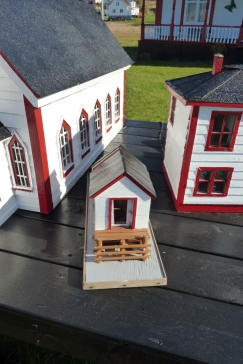 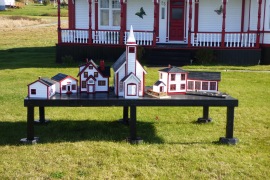 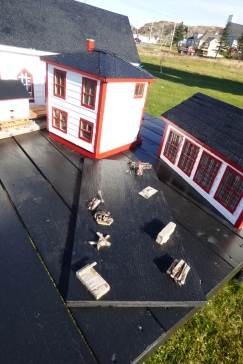 We didn’t visit the Twillingate Museum, which we’ve done many times before. Besides a great history of the community it houses a lovely crafts shop and books about Newfoundland and Labrador. We still haven’t done the tour of the Auk Winery and while their restaurant is now closed for the winter, I think they run tours year round. So much to do! We should have spent two nights.

On our way from Daisy’s Place to Twillingate, I’d noticed the The Orchid Cafe in a building near Little Harbour. Because it was open and inspired by the meeting the night before, I mentioned to Leo that I wanted to stop on our way out of town.

What a great treat and surprise.

The café has been open for 4 months and is a year round operation. Closed on Saturday, the owner told us except for blizzards, she intends to serve her local clientelle all winter! There were people eating in while we were there and regulars coming in for coffee and sandwiches to go.

We couldn’t resist the homemade blueberry and partridgeberry muffins and they were as good as they looked. Local berries and a talented baker. A great combination.

The baking counter was almost ful when we got there but getting a lot of action in mid afternoon. 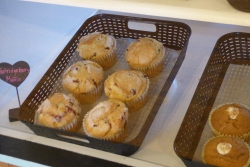 I shot around the people seated in the cafe. I’m guessing there was seating for 20 people maybe?

A nice menu and not deep fried!

How cute is this for Halloween!

These hours are great as there is another cafe in Twillingate that opens on Saturday as part of their winter hours.

We had an excellent adventure and certainly found lots to do and lots  of homemade food to eat!

As I was looking back on the post, I realized we also visited 3 businesses that did not exist last year and they are now all year round, not seasonal,  enterprises! Lots of places to send friends and guests.

We look forward to our next Twillingate tour!

Maybe we’ll take this in! Lots to do when the icebergs are gone. 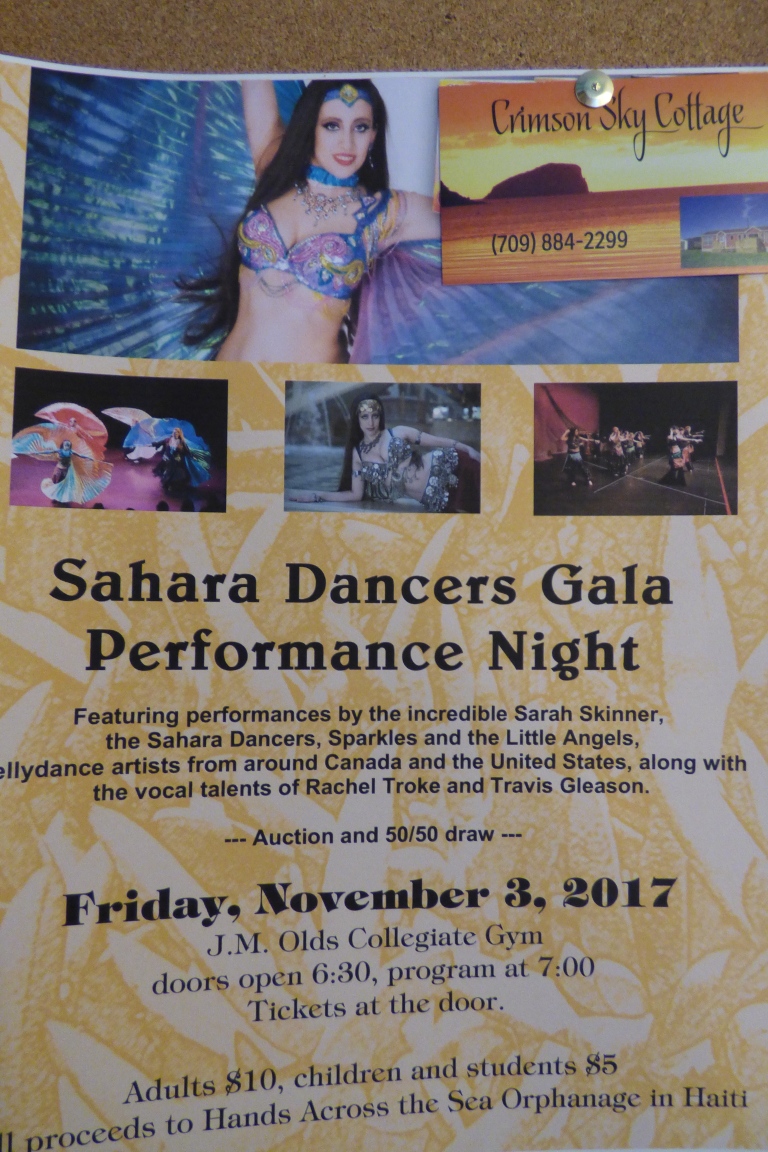 I think the daisies at the end of the trail were a sign we’ll be back. 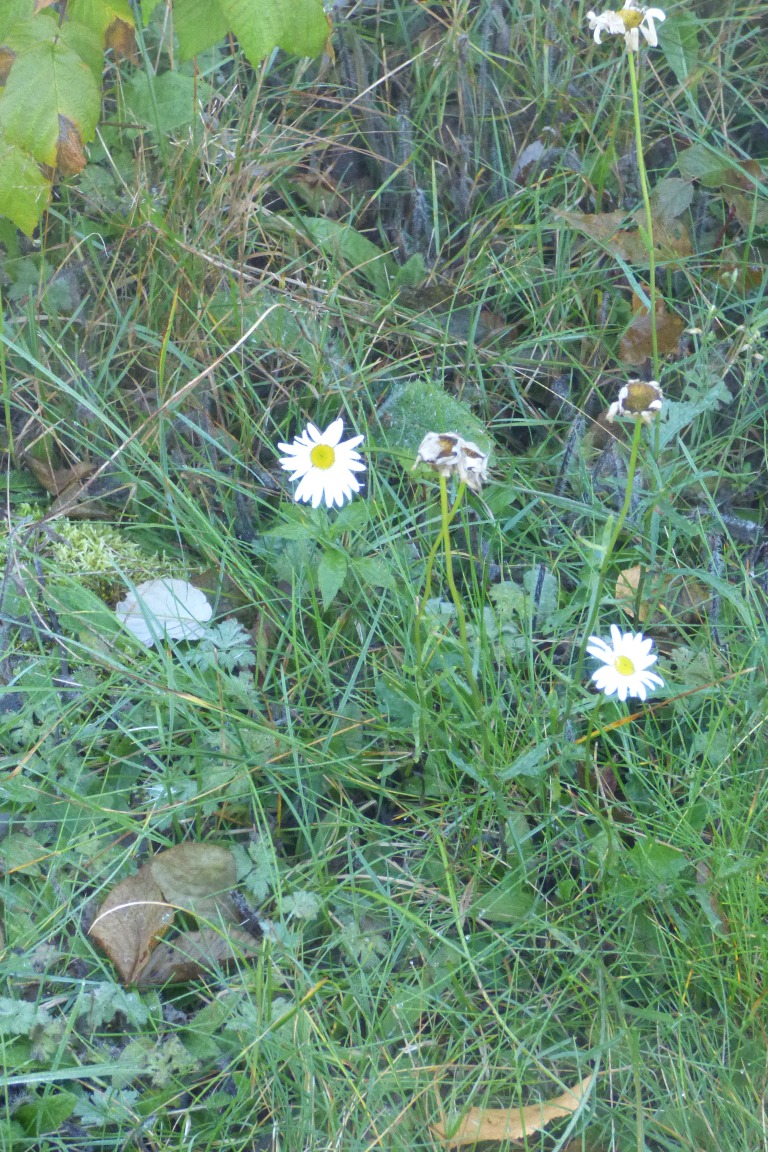 One thought on “Fall visits to Twillingate”